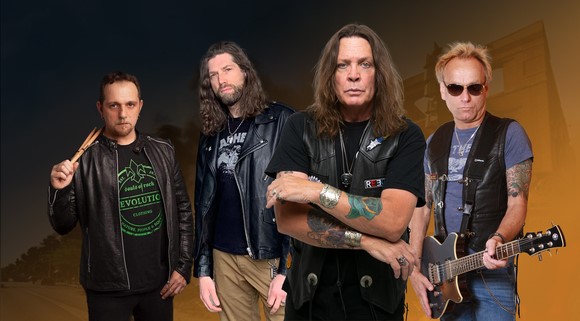 The new album from DAVID REECE Blacklist Utopia is going to release on October 29th, 2021. The album contains 13 new songs, which are again produced by Andy Susemihl. DAVID REECE is going to introduce the first video of the new album I Can’t Breathe.

DAVID REECE has created quite some classic albums during his eventful career.
He left his mark on bands like Accept, Bangalore Choir, Bonfire, or the Sainted Sinners and enriched the albums with his charisma and unique and outstanding voice. And the new album “Blacklist Utopia” will soon become a fan-favorite as well for sure.

The super successful collaboration with Andy Susemihl (a.o. Ex-U.D.O.) as a guitar player, songwriting- and recording partner, which already made the predecessor album Cacophony Of Souls an absolute listening pleasure goes into the next round.

And DAVID REECE seems to have found an almost inexhaustible resource of fantastic vocal lines and thrilling choruses, while the band creates the music for it. Also, Bass Player Malte Burkert has been established as a constant songwriting partner and new drummer Francesco Jovino (Ex- Primal Fear, Ex- U.D.O.) gives the album an additional kick and metal touch!
Ex-Accept meets ex-U.D.O. is ready for the next round.

Thrashing from the depths from the hot Australian wasteland rises this iconic inferno with an uplifting brutal blend of Heavy Metal played with furious veracity and an uncompromising attack in the Australian Heavy Metal scene.

KILLRAZER with their latest assault  THE BURIAL BEGINS With 10 outstanding smashing tracks featuring guest RIPPER OWENS alongside an awesome cover track. KILLRAZER features members from (DARK ORDER, GRUNGEON, DEVINE ELECTRIC, etc..) This is an album that will blow your face apart with its heavy intensity. The Album will be unleashed on November 12th via Battlegod Productions.

KILLRAZER has also been a major Australian support band for bands in the likes of Malevolent Creation, Dismember, Children Of Bodom, Vader, Sodom, Destruction. Also, they were the touring band for Paul Dianno and Tim Ripper Owens. 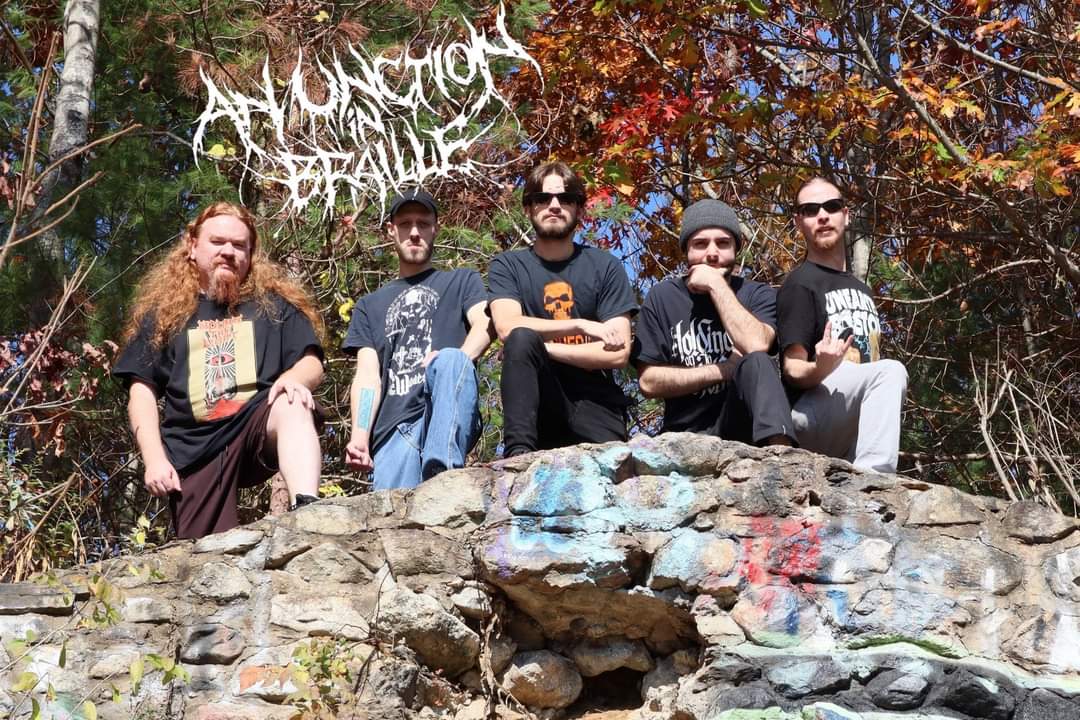 An Unction in Braille: New England based Melodic Deathcore Band Released New Lyric Video for Of The Dead & New EP The Wordless Whisper Out 29th of October

New England based Melodic Deathcore Band, An Unction In Braille drops the hammer on their debut single ‘Of The Dead’. Fast, heavy, and dark. The lyrics depict a man trapped within his own insanity. “Has he killed someone? Is he next? That’s left for the listeners to determine.” The first single off their Debut EP, ‘The Wordless Whisper’ which suffered a full year of waiting through a pandemic to be revealed. The EP is strongly influenced by Death and Loss, and will be released on October 29, 2021.

Many years in the making, and then haulted by a pandemic. An Unction In Braille’s debut EP, ‘The Wordless Whisper’, won’t fail to impress. “The EP is flooded with death, loss and despair. Every one of us put our blood into writing this.”

From feelings of rage to feelings of hopelessness, this will keep your fists clenched until the end. Tucked away are fierce blast beats and impassioned fretwork that give way to explosive breakdowns. Songs that range from hardcore to death metal, with a touch of melodic euphony. Open yourself to a new style of Melodic Deathcore.. iN Braille. The band about the EP.

Minus Life: Brisbane’s Metallers Release The Official Video For The Song Order Disorder

Australian extreme heavy metal act MINUS LIFE unleashes the music video ORDER DISORDER, from their forthcoming album CONTORTED REALITY which will be released on 1 October 2021. This is a dark metal journey blending a mixture of melodic / thrash / death / prog metal influences with an accompaniment of orchestral sound being referred to as a cinematic element, MINUS LIFE delivers on their first full production film experience.

ORDER DISORDER lyrically is about the fall of mankind, earth, the control of governments over its citizens. The greed of this system, trade deals, money, and power, comes across as a priority before the sustainability of our earth and humanity itself.

ORDER DISORDER pummels the listener’s ear with tight, hypnotic, polyrhythmic riffage only to then take the audience on a technical musical interlude featuring soaring vocal melodies and an emotive guitar solo. This moment of reprieve is shattered immediately as the song shifts into the crushingly heavy outro, which is sure to get heads banging and cement this song as a permanent staple in the band’s live repertoire.

TRAVIS HENDERSON (Drums/ Orchestral) on ORDER DISORDER – “To me, this is the beginning of the new MINUS LIFE sound. Order Disorder was the first song to be written with the orchestral element in mind. It means a lot to me and is one of my favorites. The contrast between brutal and melodic on this track is a real highlight for me personally”.

The Video was premiered yesterday by Australian’s Heavy Magazine.

Pre-order is available at Minus Life‘s Bandcamp page: https://minuslife.bandcamp.com/album/contorted-reality-2 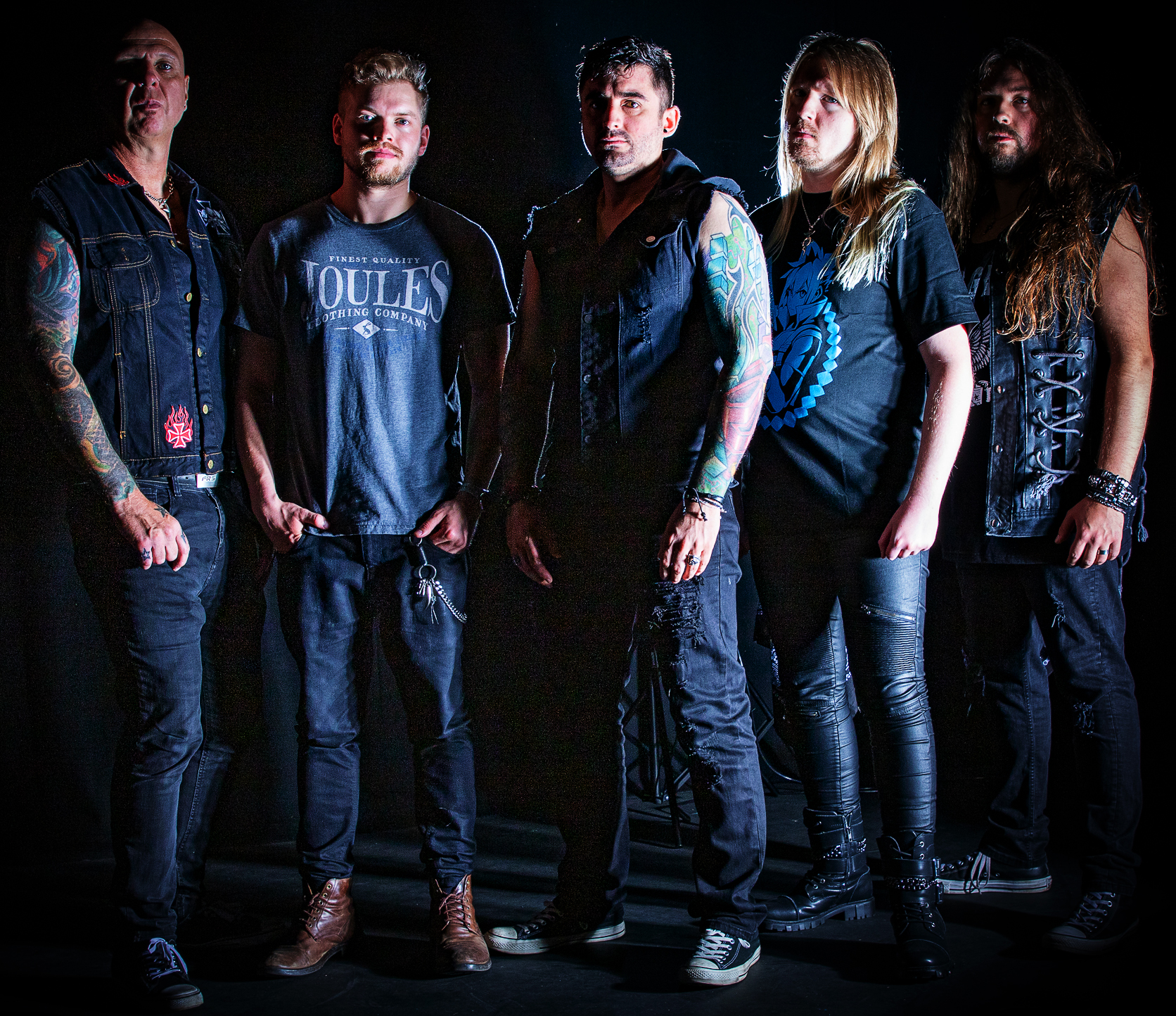 LIFE OF A HERO is the UK’s new Melodic Rock sensation. Fronted by the unique vocal talent of Russ Grimmett (Son of world-renowned frontman for Lionsheart & Grim Reaper, Steve Grimmett). The band showcases a selection of up to date Powerful, Melodic Rock on their debut album LETTING GO which will be unleashed on November 12th via Battlegod Productions.

The band already released a video for their opening track 3D on their YouTube channel, and now the band is releasing the second video for the album’s title track Letting go. Watch it below.

With a unique band name, specifically chosen to acknowledge the number of heroes throughout the years, up to these unprecedented times, and further, LIFE OF A HERO invites you to become part of their future… 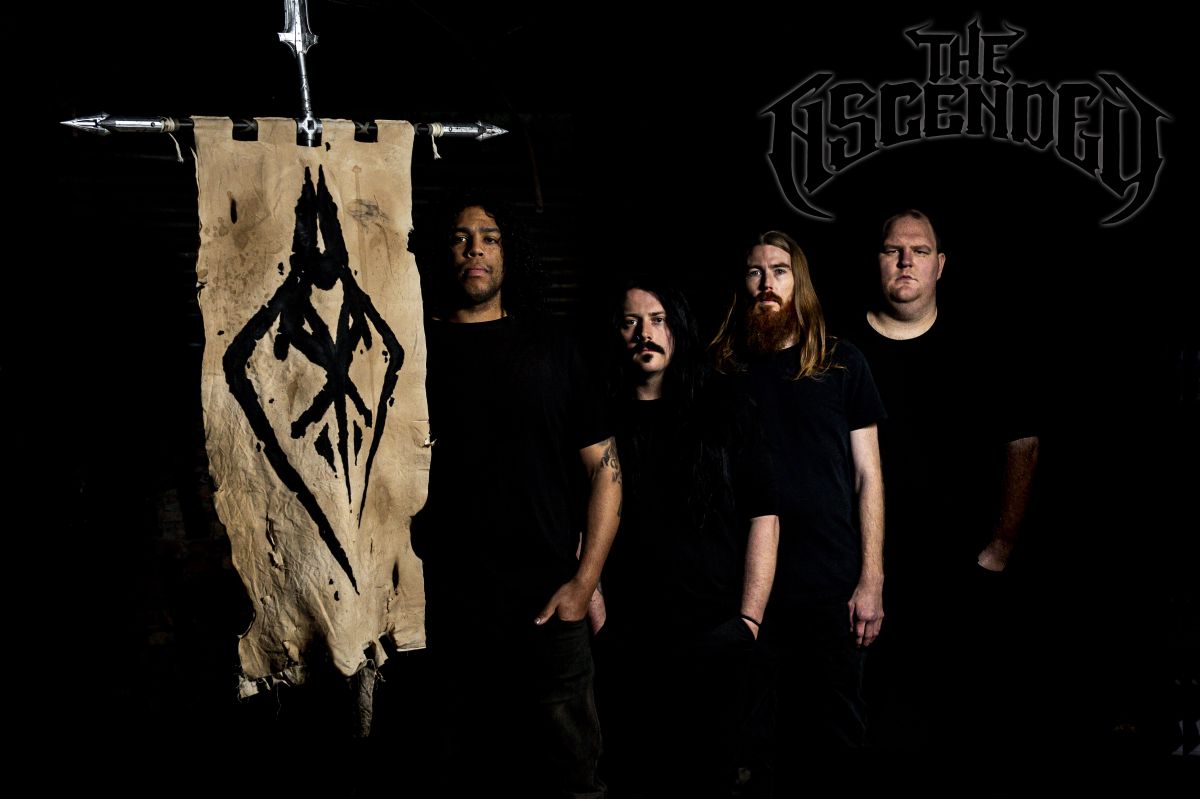 Melbourne metal quartet The Ascended is set to release their upcoming album The Dark independently on September 17th, 2021. The band released an official music video on their YouTube channel for the title track The Dark a month ago and now they releasing a lyric video for the track Embrace the Suffering.
Or stream the song on Spotify.

A statement from the band:
The Ascended are taking back Metalcore! The genre “Metalcore” has been claimed by bands that simply do not fit the label. We don’t have a stylistic home because so many bands have adopted the title. We fit closest to thrash bands in this modern era, which is definitely not a bad thing; they riff as we do, but back 15 years ago, in the glory days of true Metalcore, we would fit right alongside all of those bands.

If you look at the bands that really owned this genre back in the mid-2000s compared to the bands that are calling themselves Metalcore now, you couldn’t even have them on the same lineup.

We’re here to bring back the riffs to Metalcore, to bring back traditional breakdowns, clean vocal choruses. Everything we love about Classic Metalcore that fans of true Metalcore love, we’re bringing back with this record. 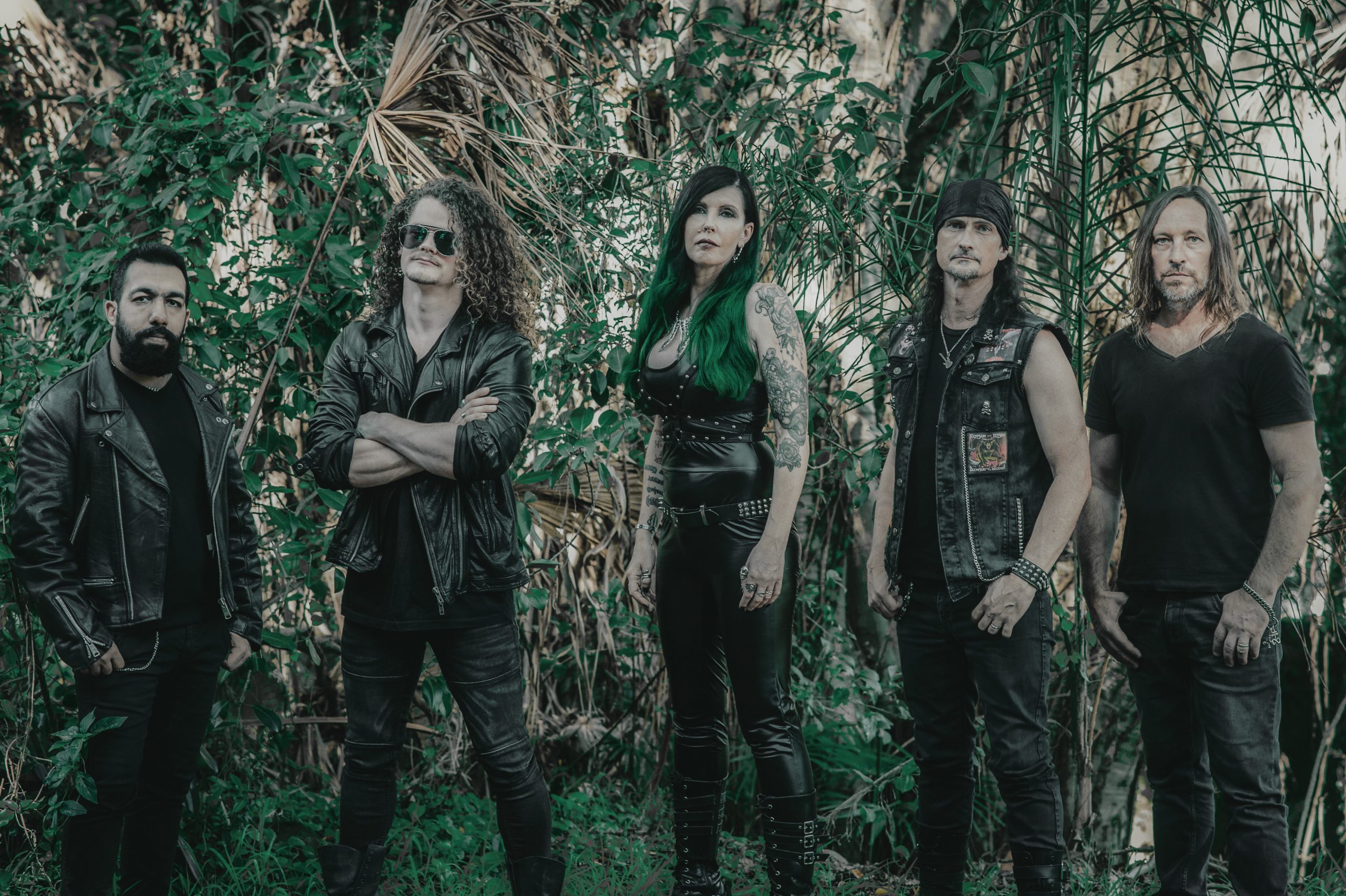 Temtris: Release Music Video for Race to the End

Australian female-fronted powerhouse Temtris released a new music video Race to the End. The song is the opening track off Temtris 6th album Ritual Warfare, released on the 30th April 2021 through Wormholedeath Records.

When Sydney, Australia was put in lock-down the Temtris crew had their tour of the latest album release, Ritual Warfare, cut in half. Instead of waiting that the lock-down is over, they pushed forward and decided to make a clip for the powerhouse opening track, Race to the End.

Putting together the idea of filming each member playing the song on a green screen in their own home and piecing the footage together to make this killer track available for all metalheads to enjoy!

This track has been a favorite of radio stations around the world and with lyrics, we can all relate to about life and time. It’s a fast-paced track with a dynamic bolt of Power / Speed metal
with a big catchy chorus and riffs that will stick in your head.

Ritual Warfare single is available on all digital platforms.