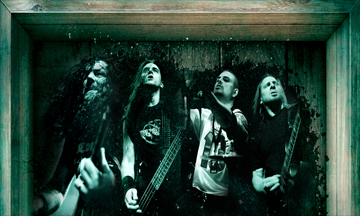 Ready to set the Australian metalscape ablaze once again, Sydney thrash giants KILLRAZER have released their much-anticipated new album ‘THE BURIAL BEGINS’ today November 12th, and coming off the back of a tumultuous few years for the world, the band knows that it has never been a better time to unleash this album.

“This world we live in has really put us all to the test,” the band states, “Killrazer feels this album suits the current climate of despair, desolation, division, mistrust, and downtrodden spirits.”

It’s safe to say that fans will not be disappointed with this release.

“As we all emerge from this slumber, we need to remember our energy, our spirit, our anger, and our own thoughts and beliefs that we had before the world turned to chaos,” Killrazer reminds us.
“It already was, but just a different era of chaos! We believe this album will allow that sleeping aggression to find its place.”

KILLRAZER has made its presence felt both locally and internationally. With high-profile support slots of metal greats such as Children of Bodom, Malevolent Creation, Dismember, Vader, and Sodom, they have become a mainstay in the wider metal community.

What the media says:

“Overall a fantastic album with meticulous musicianship and delivers exactly what it promises, a full-on assault of brutal thrash/death metal.” 4/5 ForsakenMisery – Metal-Roos