INNASANATORIUM: Silverchair Cover of “Freak” & “Odyssey Of The Mind” Out Now! 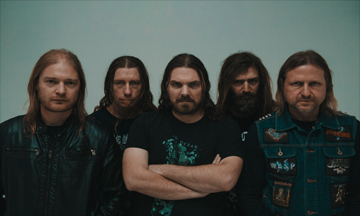 Today, West Australians Innasanatorium release their album Odyssey Of the Mind. Guitarist Ryan shares about the album: “‘Odyssey of the Mind’ is a journey of emotions from the initial decline and a feeling of despair, to a the desire of wanting to be happy and fulfilled in life.”

Additionally to today’s album release, Innasanatorium drop their amazing Silverchair cover of the song Freak. Check the video out below.

Bio
Hailing from Perth, Western Australia, the most isolated city in the world, five-piece heavy metal band Innasanatorium were spawned over a mutual love of diverse heavy metal music. Innasanatorium was founded in mid-2018, by Kelvin Edward Whitwell (aka: Justin$anity) and featuring past and present members from Medusa’s Gaze, Suffer In Rot, Sheol of Abbadon and Rapid Fire. This new band has come out of the blocks with all guns blazing and are now ready to take their unique brand of progressive thrash metal to the masses. Innasanatorium draws on many influences to create an inspiring brand of riff-based and message-driven progressive thrash metal, that draws heavily on both old school and new school inspirations.

Much of their lyrical content is inspired by real-life events and although chief lyricist Adam Bomb draws heavily on global issues such as corruption, politics and religion, this band are passionate about all forms of mental health (ie decline, recovery) hence the name (a play on words describing one’s Inner sanatorium). A large part of their musical scope deals with mental health decline and is tailor-made to get the listener thinking and hopefully talking about these very real issues. This is thinking man’s metal that is thought-provoking and message-driven.

The music that this band creates is equal parts passionate and technical while being emotive and powerful. It’s designed to make you feel uncomfortably comfortable, with the pain and joy in both the light and the dark. There is certainly a lot to like about this band, with tasty riffs aplenty courtesy of riff machine dual guitar combo Ryan and Rapid laying down a solid foundation for Adams soaring vocals and powerful lyrics.