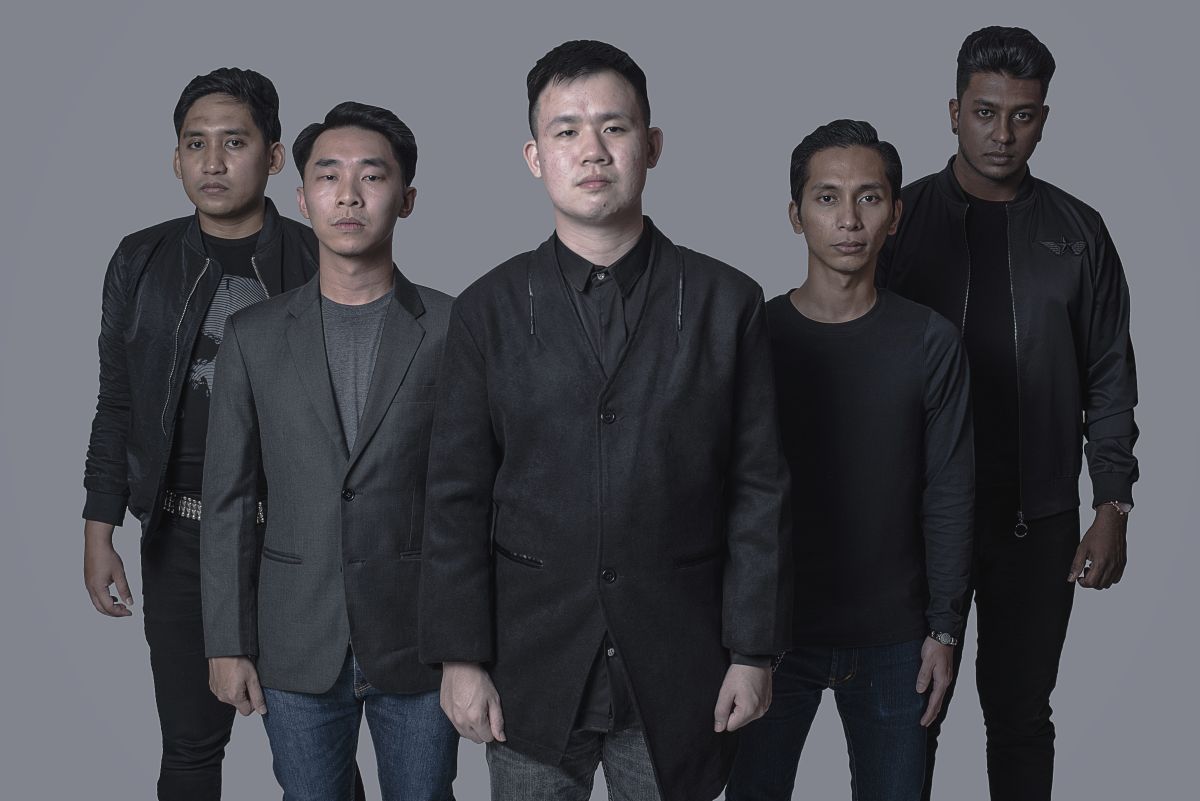 Today, Singapore’s Melodic Death Metallers Assault are releasing their album In Aevum Et IIustrata (In the Age of the Enlightened) via Eastbreath Records. To celebrate the release the band dropped a new lyric video for the song MDCCLXXVI Novus Ordo Seclorum.

Vocalist Clarence Chong says: “We’re extremely proud to have released our second album ‘In Aevum Et Illustrata’. This is our strongest efforts till date in terms of production and song-writing. Over the course of 15 years, we have matured a lot both as a human being and as a musician. We hope to offer our listeners our brand of extreme music and our interpretation of the original Illuminati formed by Adam Weishaput in 1776.”

The latest single entitled MDCCLXXVI: Novus Ordo Seclorum was inspired by the events that leads up to the ultimate demise of the original formation of the Illuminati in 1788. The album also featured a guest appearance by Andy Gillion from Mors Principium Est on the track 1788.

This is what the media says about In Aevum Et Ilustrata:
“Assault is not here to laugh. If you don’t know the band, In Aevum Et Illustrata will trample you with attitude and violence until you cannot handle it!” 90/100 Acta infernalis – Deathliger’s Reviews

Popular Brisbane music identity Chalky Hill is best known for decimating drum kits up and down the East Coast of Australia but underneath that solid hand a deeper passion for music has simmered, finally being unleashed with his debut album Remains With Pain, released on June 12 of this year.

Released under the name Militaria, Remains With Pain comprises nine tracks of pure thrash mayhem conceptually based around the Vietnam War and the bravery and desolation felt by those who fought it. Inspired by the mastery of Sodom’s 1989 release Agent Orange, Chalky set out to make a thrash fuelled homage to metal utilising the skills and expertise of musicians he has played with over the years.

After setting his sights on writing his own album over five years ago, Chalky laid down the initial drum tracks for Remains With Pain back in 2016, painstakingly narrowing down a plethora of ideas into the nine that appear on the album. While often a labour of love that seemed destined to never reach the ears of the music world, Chalky’s ambitious project began to take shape and eventually manifested itself into the four-track EP Cyclonic Desolation that added impetus to Chalky’s resolve.

The EP’s response spurred him on to finish the album and in early 2020 an assembled collection of musicians from some of Brisbane’s finest bands joined forces to begin tracking the songs, finally wrapping up earlier this year.

Members of Wartooth, Odius, Asylum, Idle Ruin, Bone Marrow, Seraphic, Deraign and more helped bring Chalky’s vision to life, with the young drummer now setting his sights on releasing a music video and a documentary detailing the journey of the album from conception to release. Plans are underway to take the project on the road as a guitar fuelled performance with backing tracks, with work on the follow-up already underway.

Further expanding the involvement of local musicians, Chalky will look beyond his home base for the next album, setting his sights on a national scale with a range of his peers and contemporaries.
The carnage has just begun. Stay tuned! 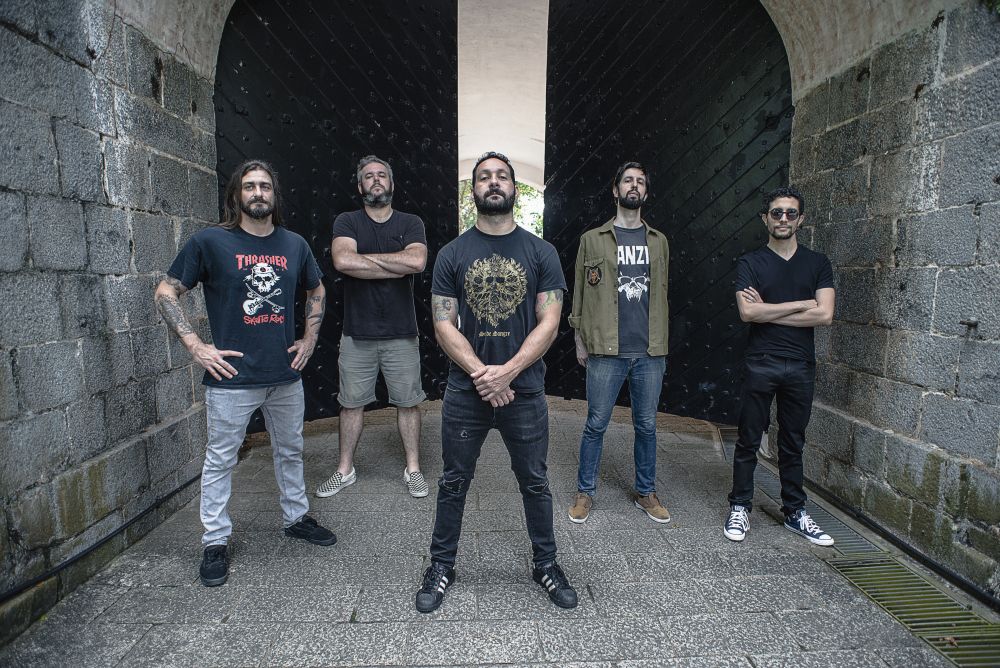 Today, Singapore based metal band Veterans unveils their brand new single Opportuniac on Spotify alongside an official lyric video on Youtube independently. The release of Opportuniac is a taste for the forthcoming, highly anticipated debut album Fake Quiet and Peace.

Thrilling, unapologetic and heavy, Opportuniac is the anthem for the apocalypse, providing a sonic backdrop that perfectly encapsulates these recent times. Opportuniac arrives alongside an iconic video produced by Marcelo Silva, who has previously worked with the likes of Nervosa, Sol de Sangre, and the Metal Against Coronavirus projects. The video further showcases the bleak undertones of the track, compounded by smart lyrics, ripping solos and a driving rhythm section.

Drawing from a wide-range of influences from Chuck Berry to Bad Religion to High on Fire to Carcass, Veteran‘s first full-length album Fake Quiet and Peace is as broad as it is heavy. The five band members focus their international experience, hailing from Bulgaria, Colombia, Morocco, Scotland & USA, and direct it through a South East Asia lens with their clever songwriting and lyrics.

Vocalist Kike Valderrama about Fake Quiet and Peace: “This album is fueled by the heavy music that brought us together. We hope these tunes will fire up those who already know about us and motivate others to check us out as well. We’ve been working towards this record for the last two-three years and we feel that we have captured the music in a way that we haven’t before. It feels like it comes from the gut. I dig it. I Hope you do too.” 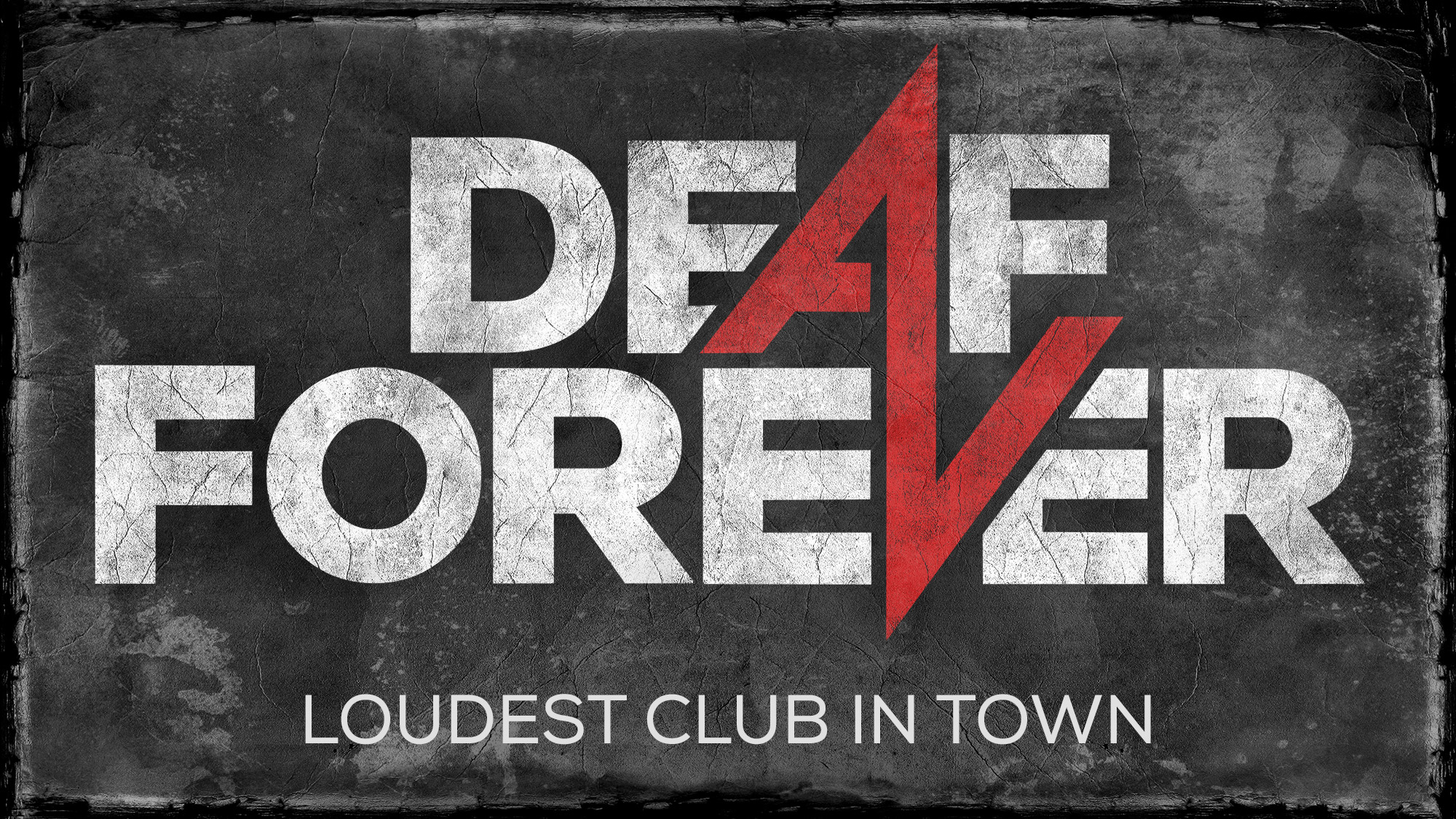 Deaf Forever is Melbourne’s newest metal nightclub and its grand opening has just been announced! Deaf Forever is a Heavy Metal Nightclub with a focus on live music, give aways and a DJ driven after party. Everything a metalhead could wish for in a great night out! The club is even named in honour of the classic Motörhead song, Deaf Forever. (Orgasmatron album, 1986).

The Deaf Forever grand opening is set for Friday 2nd July at the Bendigo Hotel with a stacked line-up of Elm Street, Envenomed, Armoured Earth and Ironstone. DJ Slaytanix will provide the tunes for the after-party and El Puerto Records and Metal United Down Under will provide the give-aways.

Deaf Forever is a new project by booking, PR and management agency Black-Roos Entertainment. Michael Lueders from Black-Roos Entertainment says about the project: “For a long time, I have wanted to open a metal nightclub. To put on regular events where heavy music fans could come along and celebrate the music they love with LIVE bands and a great atmosphere. It’s also a way of providing opportunities for young and emerging heavy bands. This seems like the ideal time to set that plan into action, especially after the scene has suffered so much in the last 12 months.”

About the lineup:
The grand opening will be led by Australia’s rising phenomenon Ironstone. The young progressive metal band from Bendigo released their highly-acclaimed debut EP Prophecy last year. Ironstone are followed by Armoured Earth, a 5 piece outfit that simply loves to write good, strong, hard-hitting yet still catchy and original heavy metal music. Armoured Earth will launch its EP Empire at the grand opening of Deaf Forever.

Envenomed are a Melodic Thrash driven Heavy Metal band that have been a consistent and dominating force since forming in the mid-2000s. The headliners will be Elm Street. The band has taken the metal scene by storm with their unique style of traditional heavy metal. With a style that is heavily influenced by bands such as Iron Maiden, Judas Priest, Manowar and Savatage, Elm Street has claimed their spot in the vastly growing new wave of traditional heavy metal. 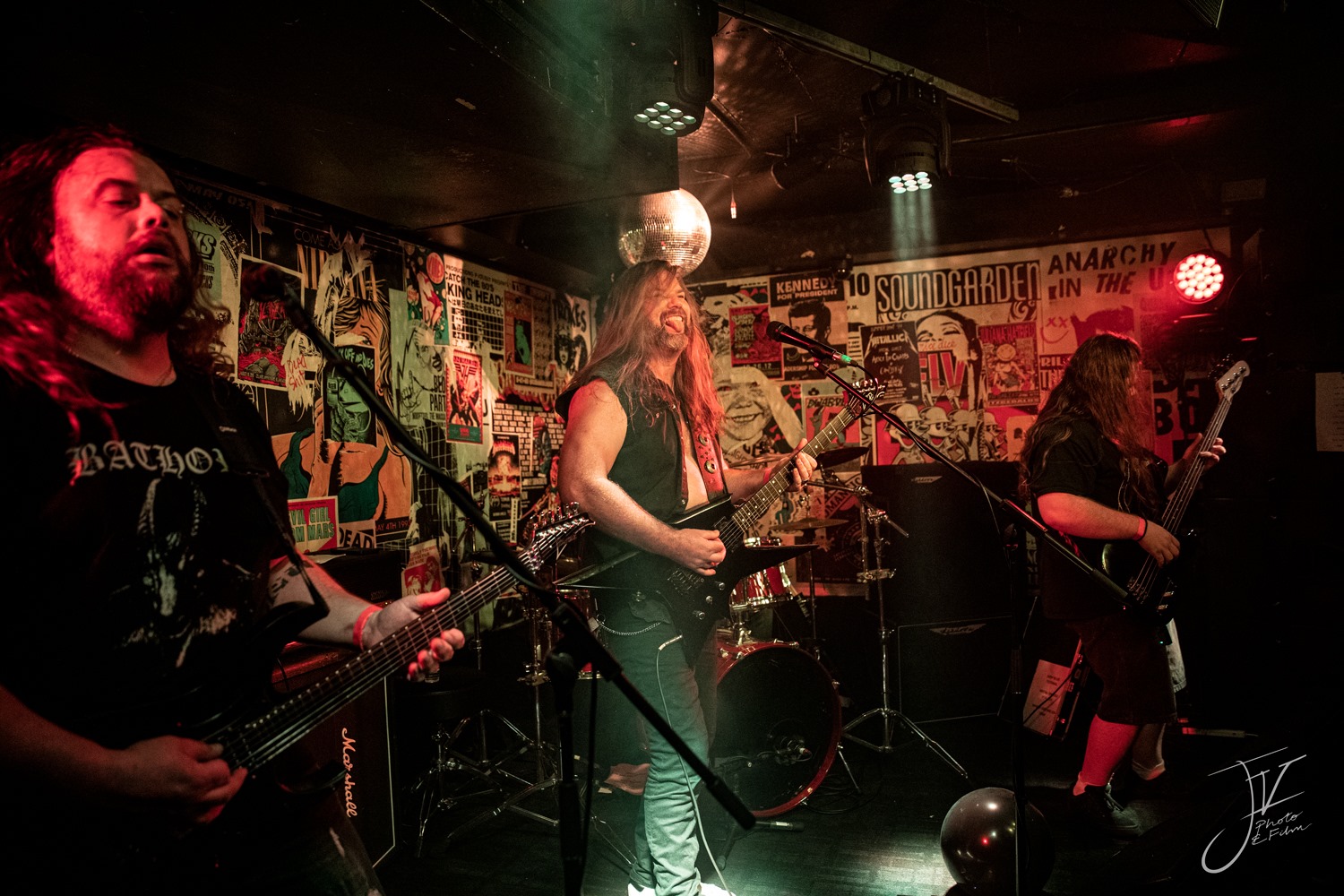 EnforcE release a visualiser for the title track Deep Blue today from their long-waited 4th full-length release. The album Deep Blue will be officially released on 1 July 2021. Singer Guy says about the song: “Deep Blue– A respect for one of mother nature’s forms of strength which is the ocean and the battle of humanity to wield its power.” 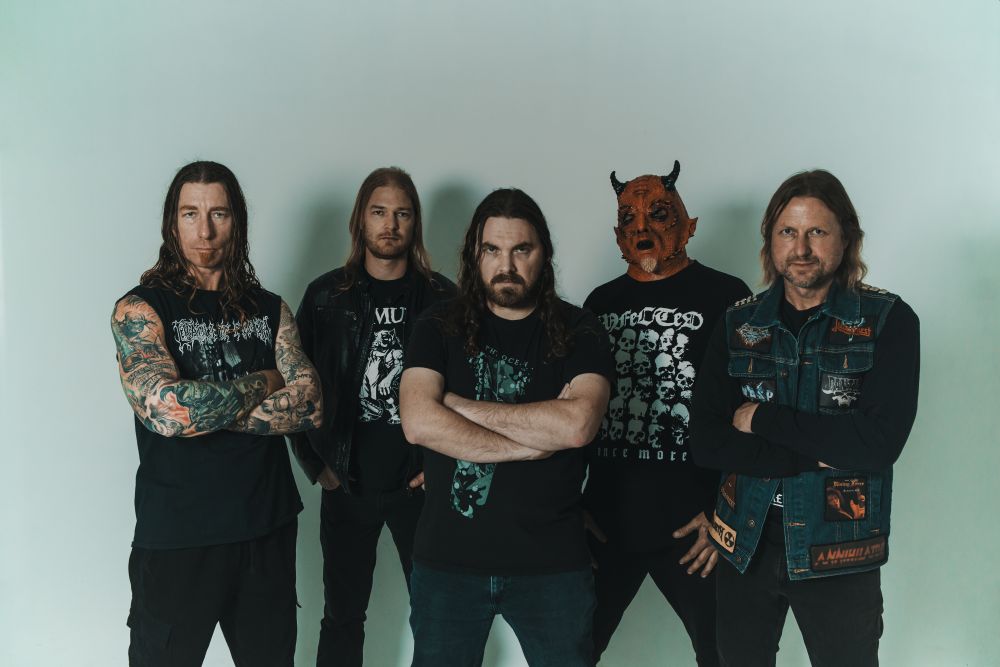 West Australians Innasanatorium release their lyric video Science In The House Of God today. The song is part of the upcoming album Odyssey Of The Mind. The album will be independently released on 10 July.

Vocalist Adam shares the story behind Science In The House Of God: “It’s about how religion and science are on opposite ends of the spectrum and can’t really exist together. Every scientific discovery that contradicted the teachings of the church at the time was branded heresy and people were killed or imprisoned for speaking the truth. Eventually science wins to the point where religion has become obsolete.” 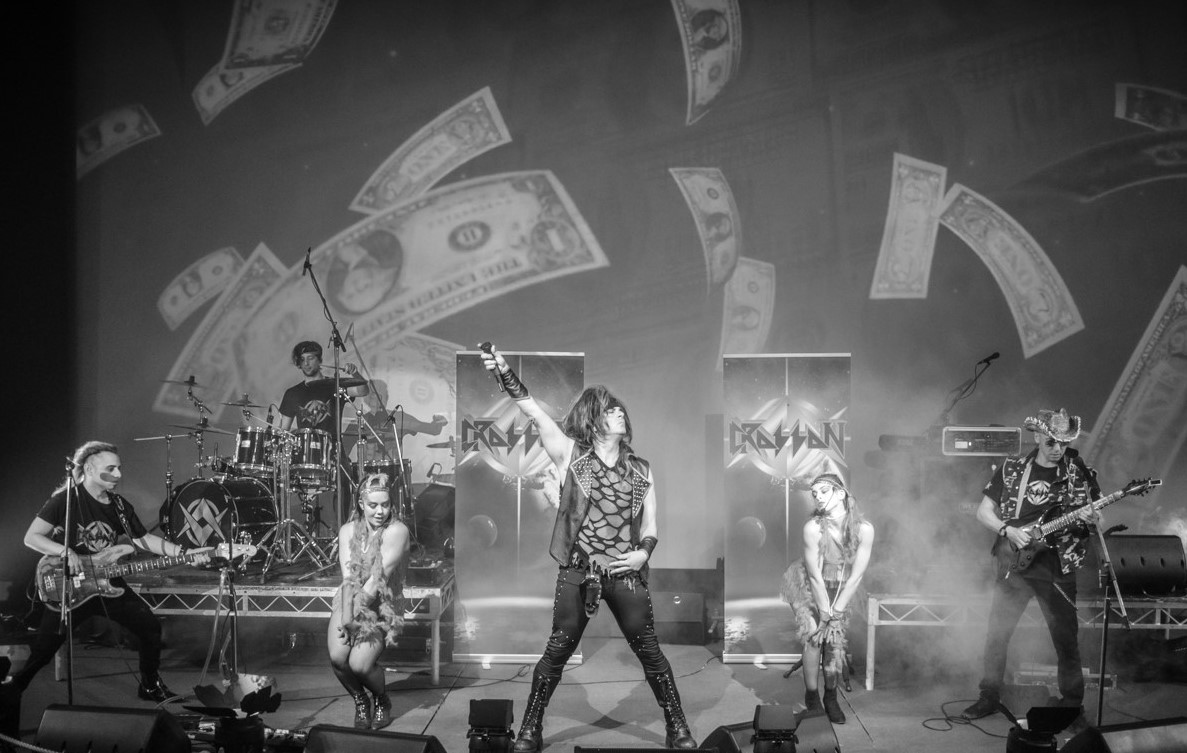 Since they exploded onto the melodic rock scene with their 2016 release Spreading The Rock ‘N Roll Disease, followed by 2018’s Invincible and 2020’s Rock N Roll Love Affair, Aussie theatrical glam rockers Crosson have established themselves as a force to be reckoned with delivering their hard driving, catchy, uplifting, stadium rock anthems.

Crosson’s engineering team of rock royalty consisting of Duane Baron (Motley Crue, Poison, Ozzy Osbourne) and Dave Donnelly (Aerosmith, Whitesnake, Cher) have not only given the band credibility but have added a unique sonic boom to their 80’s influenced sound. However, it’s been Crosson’s over-the-top, high energy, saucy, theatrical stage shows which has been winning the hearts of punters in the land Down Under.

“We constantly receive requests from fans in the USA, Europe, UK and Russia who have seen our videos and want us to come and play for them” says Jason Crosson (singer/writer/producer).

However, during these crazy times where international touring is not possible, following the motto “If the mountain won’t come to Muhammad, then Muhammad must go to the mountain.” The band will be releasing their first live album and concert video titled ‘Crosson – Live At The Orpheum’.

“The audience always goes nuts when the girls come out in their Japanese kimonos and skimpy army uniforms during ‘I Wanna Be Japanese’ and ‘We All Need An Enemy’” says Crosson.

Filmed in high definition with multi cameras in front of an excited home crowd at The Orpheum Theatre in Sydney Australia, the concert video shows Crosson in their element; delivering their bombastic, cheeky, entertaining, choreographed, multimedia stage show. The concert video was edited and mixed by Australia’s metal maestro Lord Tim (LORD).

The album and concert video will be available in digital formats as well a limited-edition Blu Ray / CD box set.

Crosson – Live At The Orpheum will be released globally on 25 June 2021 through Galaxy Records.