Australian Alternative Groove Metal band Chaosaint releases today a lyric video for the second single Knives Are Drawn. The song is on Triple j Unearthed Metal Charts Number 1 . You can find the song on the Triple J Unearthed page: https://www.triplejunearthed.com/artist/chaosaint

Chaosaint says about their single Knives Are Drawn: “Knives was one of the more recent songs we wrote. It’s a five-minute ode to the evil that people are capable of especially during the breakdown of a marriage or relationship. Pantera and Machine Head were huge influences on us and we tried to combine a bit of that signature groove metal swagger with a bit of a Lamb Of God vibe thrown in for good measure.”

Chaosaint state about the EP “We recorded the EP over various periods dating back to 2016 in the spare room of my house. Originally we intended to release a full-length album- Chris came down and we recorded drums for 11 songs. The project almost seemed cursed, the final mixes were almost complete and a power spike fried my PC and we lost most of the recorded material- even the backup drives died. We were able to salvage some of the original drum tracks but had to re-record the guitars, vocals and bass- I’ve since learned my lesson and invested in some cloud storage as well!”

Unable to play live to promote the release due to current restrictions on live music due to the COVID 19 pandemic, the band are already working on material for a full-length album with a 2021 release date and also intend to release more material from the initial lost recording sessions later this year. 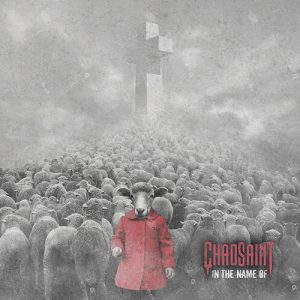 1. Knives Are Drawn
2. Both Eyes Open
3. Darkness Following
4. In The Name Of
5. Blackened Days