Plague 9‘s EP Mr Ass is out now! The Australian traditional heavy metal newcomers from Adelaide have just released their debut EP. Mr Ass is a good mix of thrash and more traditional style heavy metal riffs. Drawing influence from bands such as Metallica, Megadeth, Pantera, Iron Maiden and also Jeff Loomis, Marco Sfogli and Andy James… there is sure to be something for every headbanging metal junkie.

“Each track is riddled with savage & catchy riffs and filled out with blazing solos.” Hysteria Mag

The EP’s artwork was created by Dusan Markovic who has worked with bands like Dragony, Mystic Prophecy, Dragonheart..

Formed by rhythm guitarist/singer Devon Smith and bassist John Hopf in 2017, Plague 9 recorded their first song Stuck in Hell for the release on the Metal United Down Under Vol 1 compilation. Since then lead guitarist David Hone has jumped on board bringing his very unique playing style and blistering speed taking the songs into a new dimension. 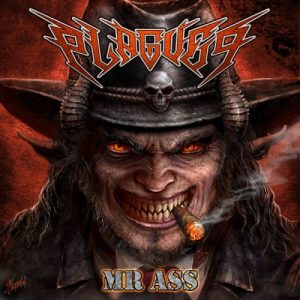 MR ASS is available on their Bandcamp page.