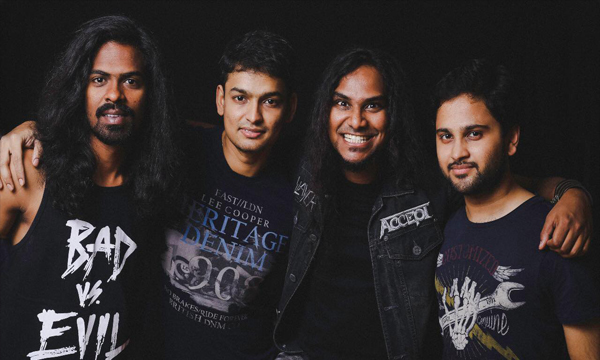 Indian heavy metal band Against Evil are taking the road with their third video ‘Mean Machine‘. The song is taken from their full length album titled All Hail The King. The album features also their famous song Stand Up And Fight! whose official video went viral. Also the second video for Sentenced to Death with guest appearance by Jeff Loomis (Nevermore, Arch Enemy) is from All Hail The King.

The band released All Hail the King as their second album on April 6th, 2018 independently.

The album All Hail the King was released on 6th of April.

Get your copy or digital version at Bandcamp.

The “9 track” full-length album is being well received worldwide with some of the top rock / metal websites, critics calling it:

Metal Nation: “The album is a mission statement calling us all to battle, and based off the quality of the songwriting, the clean sound, and the well executed performances, it’s a declaration worth listening to”

Head-Banger Reviews: “Against Evil only increases their quality and badassery tenfold with All Hail the King as they once again bring glory to the world of heavy metal!”

Dead Rhetoric: “Against Evil with All Hail the King could be one of the best newcomers for 2018 in this space – raising fists and vying for backpatch approval on jackets worldwide”

Grizzly Butts: “Their second full-length ‘All Hail the King’ stretches its sphere of influence with an overall gain in speed metal, epic heavy metal, and shred metal influences going so far as to feature Jeff Loomis on “Sentenced to Death”. With a new found heaviness, an appreciation for heavy metal history, and militantly practiced skills Against Evil make notable contribution with All Hail the King”