Indian heavy metal band Against Evil first enthralled listeners when they released their debut ‘Fatal Assault’ on the Indian sub-label of Transcending Obscurity. Three years later, they conjure up enough material to release their debut full length titled ‘All Hail The King’ which includes their famous song Stand Up And Fight! whose official video went viral in these parts. Their artwork has once again been made by the Croatian artist All Things Rotten (Hirax) and for the first time, there is a guest appearance by Jeff Loomis (Nevermore, Arch Enemy). No stone has been left unturned here in delivering a high quality, anthemic heavy metal album that would hold appeal to just about any metal fan. This here is honest-to-goodness music from a region that still loves its metal the old school way. 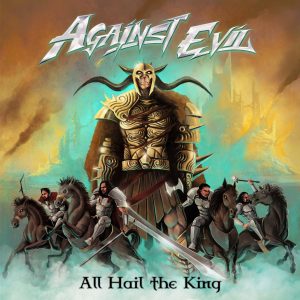 Against Evil released an lyric video which can be viewed here: