Melodic Metal Powerhouse Trigger. Raw metal grit honed to an edge with soaring melodies that will make anyone stop and give their undivided attention announced for the first Stormcrow – Wagga Metal Gathering 2018

Joining Trigger are, Odysseus Reborn from Bundaberg the band release their new album ‘Divine Inclination’. Soon to be available on all online platforms, with hard copies attainable online/at shows.
Give it a listen, if you feel so inclined.

Next on the line up is well known for their specific brand of vicious thrash, Enfiled all the way from the shadowed pines of Bathurst.

Hailing from the frozen reaches of Orange,  Stone Sovereign!

Preparing to strike out on their maiden voyage around Australia, these kinsmen will be quickly become a force to be reckoned with. Wielding their Viking Metal sound like a mighty hammer, this will be an act not to miss.

Throw up the horns and show your support for the lads in Stone Sovereign as they embark on their Eastern Raids Tour in early 2018.

An event not to miss, “Saddle the horses and ride to Wagga”! \m/ 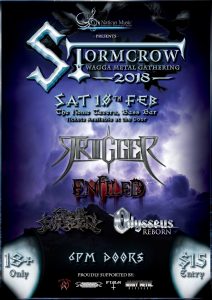